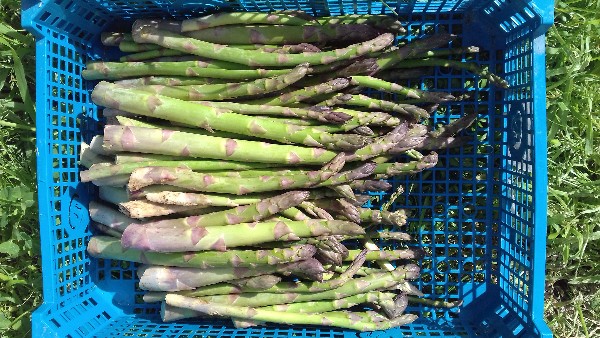 Nowadays asparagus is a speciality in North-West Europe, but it has a history that goes back to Roman and originally even Egypt times. That history gave us the idea to start growing them in the Algarve. If the oldest terraces in the Algarve are built by Romans – as they say – , why not grow ancient Roman asparagus on these terraces today?

Two varieties are known by the consumer: white and green ones. These two are actually not different species, but differently grown. The white ones are white, just because they don’t see daylight before picking: they grow in sandy mounds, you have to dig them out. The green ones simply grow above the soil, as you would expect from vegetables.

This is how you grow the plants.

To start growing asparagus, you have to be patient. Especially when you seed them, like we did.

First, in springtime, you seed them in a tray, under plastic. A month after seeding, when the young and fragile plants are already up to 20 cm, you have to transplant them into separate pots. Forget about the rule “transplanting when the first real leaves appear, after the two germ-leaves, because asparagus is a Lily-variety, a monocotyledon, so it doesn’t have germ-leaves. You just transplant them, when they’re big enough.

Then it takes a year for the fragile little plant to become firm enough to be planted on the spot where you want to keep them for their lifetime. Make sure you put them in sandy but very fertile soil. Once they are planted on their spot, it takes another 2 years before you can start harvesting them. The picture below shows the plants in the second year on their spot. But once they are strong enough to do so, oh my dear, what a yield you have.

To avoid exhausting the plant, you shouldn’t harvest them longer than 21/2 months per year though. In north-west Europe that period is from april up to mid June, but in our Algarve we have them already at the end of February and the harvesting goes on till mid may.

After the harvesting months, the asparagus sprouts grow rich and high (up to 2 metres!) until late autumn. Asparagus takes a lot of space, in width and height.

When you give the asparagus compost every year, they will stay alive for about 15 years. They also appreciate a bit of chalk now and then. After all those years, when the plant starts to grow weaker, and eventually dies, you can not plant new asparagus on the same spot, it simply refuses to grow there. So, make sure that you migrate to another piece of soil when you want to continue growing asparagus after 15 years.

Asparagus is a nice cash crop for us, and we enjoy the aphrodisiac asparagus frequently ourselves.

Sweet Basil, all you need to know to grow it.

Chop and drop in the vegetable garden, how to do it.

About the soil in your vegetable garden, what you need to find out.